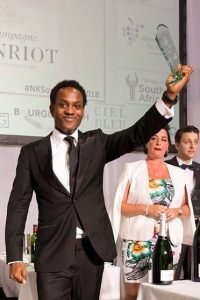 Lendl is 33 years old. He has a lot of experience in the gastronomy business, in particular as head sommelier for Waterproef restaurant in Scheveningen and, currently, as the Wine Director for Hotel Twenty Seven in Amsterdam.

He has gained a solid wine education over the years, studying at Weinakademiker, and obtaining the WSET Diploma, CMS Certified and the well-known ASI Diploma.

Q: You won the contest in The Netherlands in 2018. Did you expect it and how do you feel about it?

Lendl: First of all, I’m intensely happy to win the Trophée Henriot 2018. It’s an honor to follow some great former Champions. It’s been a long-time dream and goal of mine to become the Best Sommelier in The Netherlands one day.

I was actually not confident at all to win the tittle this year. If you would have asked me the question in early 2017, I would have answered there might be a chance. But in October 2017 I changed jobs, with the opening of a new hotel in Amsterdam, Hotel TwentySeven on Dam Square.

The change resulted in less study hours than I normally would have taken in preparation for an exam or competition. Therefore, I was not confident about the theory part of the competition, and certainly not confident in reaching the final. In addition, I knew that my fellow competitors had all taken huge steps in increasing their skills and knowledge. The weeks before the actual competition were truly nerve-racking for me. The pressure was building up & up, and as I was 2nd runner up in the 2016 competition, people expected just more and more of my performance. Now I see how sportsmen/women can break under pressure, something that luckily did not happen to me.

Q: How do you think the title of Best Sommelier of The Netherlands will change your life?

Lendl: I don’t think it will change my life dramatically. Personally, nothing changed for me, I’m still Lendl and I’m still the same Sommelier, as people do know me. It just feels so strange that people call me the Best Sommelier of the country at the moment, that is something I have to get used to for the next two years.

I think that it will be a natural continuation of things I was busy with before I won the competition. But it is true that new parties will and can find me more easily now – also because of this very honorable interview.

Q: How is the sommelier profession in The Netherlands?

Lendl: In my opinion there is a huge difference in Certified Sommeliers and people pursuing the actual tasks of a Sommelier in the Netherlands. The sommelier profession is not as highly accepted as in many other countries worldwide. There is a small group of highly regarded sommeliers who made the profession visible. Those are the professionals who were examples for many sommeliers of my generation and the upcoming generation as well. We have a great sommelier course in the country, led by Edwin Raben, but there is no internationally-accredited certification program for sommeliers in The Netherlands. Therefore, many younger sommeliers are pursuing either the WSET or the Court of Master Sommeliers programs, nowadays, something that I really do promote, as well as the ASI certification. It improves the in-depth knowledge of sommeliers in the Netherlands drastically, and gives them the ability to communicate about the profession at an international level and with a wider perspective. As a result, young sommeliers can perform much more easily in competitions.

Improvements can be made in the guidance and motivation for setting personal goals as sommeliers, something that you see more in countries such as Sweden, Denmark and Germany. By creating a national team of top sommeliers and building in standardized training programs, the level of Dutch sommeliers will increase in my opinion. Jamming together will push you further, and by learning from others, you will get better. The Netherlands are not that great during international competitions, and it’s about time that changed.

Q: You have great knowledge about food and wine. What do you think you can do to promote your national beverages and gastronomy?

Lendl: I think I cannot promote Dutch gastronomy on my own. I think Dutch gastronomy is promoting itself on a very high level, at the moment, with top chefs and sommeliers performing at a true global level. I believe that to promote national gastronomy, we have to respect and showcase all the beautiful products that are available throughout the country. This is what we do in Restaurant Bougainville, but I know that many great chefs in The Netherlands are even more eager to use regional products in their menus.

Promoting national beverages is something that is closer to my heart. As the restaurant where I work is in the heart of Amsterdam, I have many international guests. I like to show them our beautiful spirits, such as Genever, Corenwijn, gin and beers, but Dutch wine is also a standard on my wine list, as they are becoming better and better each vintage. In my opinion, it is a privilege to be able to work with well-known spirits such as Genever, with many good distilleries in the country. I am currently pouring a potato Genever from Groningen in our tasting menu, which I made myself at a very famous Dutch Distillery.