From mathematics to wine

Julia Scavo, best sommelier of Romania in 2018, speaks about how she started in wine, how she showed up on the international wine scene in 2008, and how far she is ready to go in wine science – along with some unique facts about her upcoming participation in BSOW 2019. 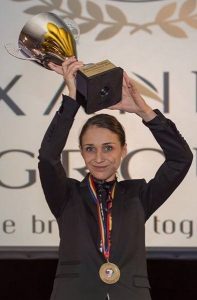 Q: You have a lot of titles and finals behind you, in European and World sommelier competitions. Can you tell us what it means for you to be Best sommelier of Romania 2018?

Over ten years of high-level competition, I never had the time or the opportunity to take the challenge again in my country. It was time for me to do it again at home. This is the most symbolic title I’ve ever won, and hope that it will be more than that. I hope it will create a bridge that will allow me to do more for my country: trainings, tastings, preparing a new generation of sommeliers and inspiring them, whatever their background is.

Q: You will represent Romania in next  World contest in Belgium, what are your expectations?

I’ve never competed in a world final! I was 5th in the 2013, my highest result. My husband Bruno Scavo will also be competing in 2019, for Monaco. A couple competing together is already a first. I hope for the best we can do, together, doubling our strength.

Q: You competed recently in the first Balkan Sommelier Challenge in Belgrade, where you won second place. How was that competition for you?

This first Balkan Sommelier Challenge was very well organized, in line with international standards. Congratulations! It was for me a good training and also the opportunity to learn more about Serbian wines. It also gave me the idea of organizing a Serbian wine master class in Monaco or Nice, thanks to the interesting bottles I discovered there.

Q: What are your plans for the future?

My WSET Diploma is currently in progress, so this will be my next achievement. Afterwards, maybe I’ll start a Master of Wine. I also plan to develop more teaching techniques and high end trainings in France and in Romania, and use my background in education for the sake of wine knowledge and tasting science, all combined with a cultural and artistic sense.