BLIND AMBITION: AN UNLIKELY JOURNEY TO THE CENTER OF THE WINE WORLD 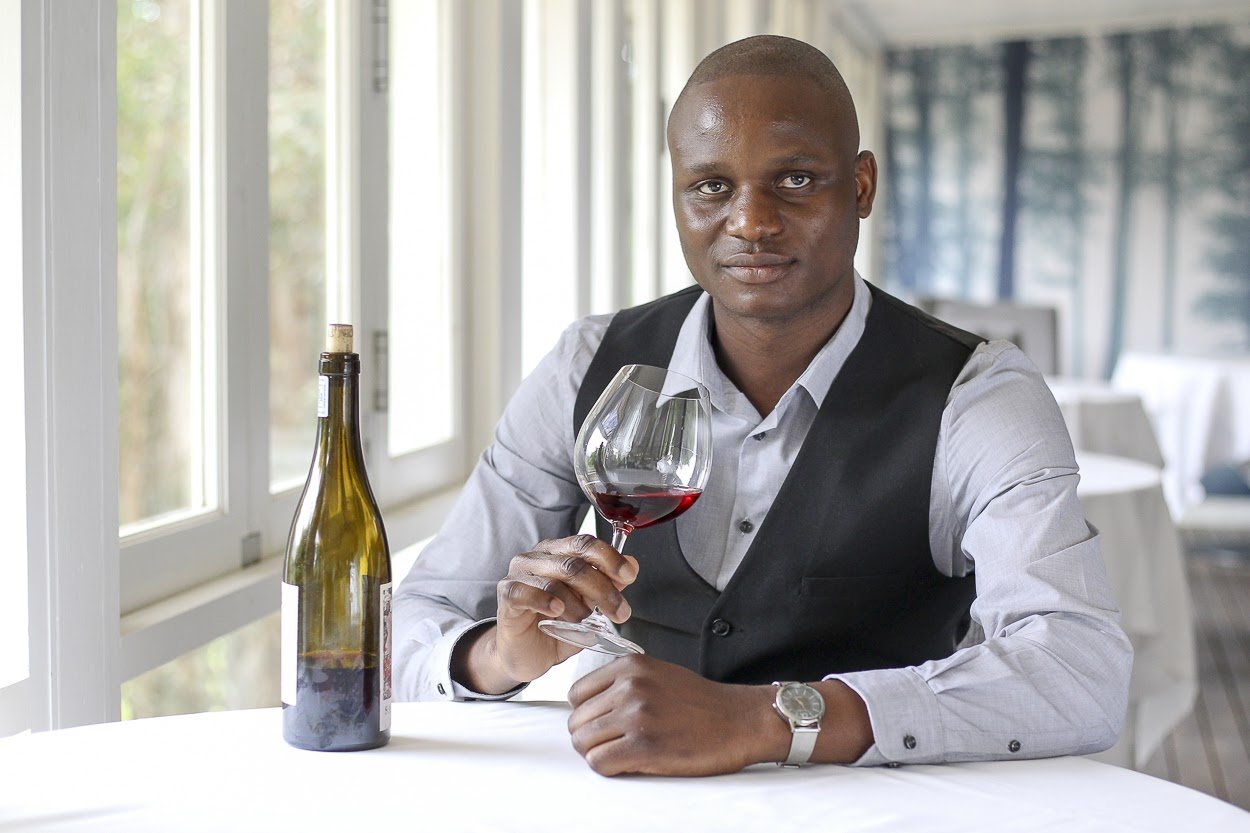 Joseph Dhafana is a member of a team of Zimbabwe sommeliers that chose to take on the world in the sport of wine tasting. Dhafana and his teammates journey to the World Wine Tasting Championship (WWTC) was a circuitous path of improbability, passion, dedication, and vision.

Growing up in the rural Chirumhanzu District of Zimbabwe, wine was not part of Joseph Dhafana’s life growing up.   After graduating from school in 1999, Joseph went to a nearby city to work in the cement business. It was here he met his wife Amelia and Joseph’s journey was destined to be on a road unlike the path that has eventually landed him the in spotlight of the world of wine.

As of 2008 the economy of Zimbabwe was in dire crisis with food shortages, mass unemployment and hyperinflation. According to Joseph “the economy of Zimbabwe was going south”. In 2009 the couple decided to flee Zimbabwe and make the courageous, but illegal, journey to South Africa. Unspeakable heat, and dangerous conditions marked the journey, but the couple made it across the border.

After time spent in a refugee camp, and eventually being granted asylum, they spent two weeks living on the streets of Johannesburg before on the behest of a cousin, making their way to Cape Town. Joseph’s path was forever changed and the first steps on his journey in the wine world about to be taken. The story of Joseph and his Zimbabwean teammates Marlvin Gwese, Tinashe Nyamudoka and Pardon Taguzu, have been captured in the award-winning (winner of Audience Award at the prestigious Tribeca Film Festival) documentary Blind Ambition; the story of the Olympian-like commitment of four men with little wine history competing on the wine world stage.

ASI: After arriving in Cape Town, how did you become part of the wine industry?

Joseph Dhafana (JD): I started doing manual jobs, such as carpentry, builder’s assistant and gardening. It was at this time I met the owner of Bar Bar Black Sheep restaurant. I started to work there in there in the garden and then he elevated me to washing dishes, then to barmen, then to waiter. It was also then in 2010, when I had my very first glass of wine and you could say the journey began.

ASI: How was that first taste?

JD: Honestly, I didn’t enjoy it at all. I started with a Cap Classique bubbly. It was a bit acidic and astringent. Definitely, not the style of wine to try as a first timer. It would have been better to start with something smoother.

ASI: How do you go from barman to champion wine taster?

JD: By 2013, I had begun studying with Cape Wine Academy and was fortunate enough to do a work term with Andrea and Chris Mullineux (Mullineux Family Wines) where I learned a lot. In 2015, I decided to take part in the South African Wine Tasting Championships, organized by Jean-Vincent Ridon. I placed third. This afforded me the opportunity to represent South Africa in France at the ‘World Cup’. In 2016, I studied to become a wine judge with the Michael Fridjhon Academy. Finally, in 2017 I founded and became captain of Team Zimbabwe.

ASI: Tell us about your experience as captain of the team and a little about the other members.

JD: I was captain based on my experience, as I had more knowledge of what was expected at the ‘World Cup’. In that first year we only beat Italy but in 2018 we returned and came fourteenth besting some top countries such as Britain, USA, Netherlands, Italy and Spain. It was during this time that we had an Australian film crew following us and the start of Blind Ambition.

In terms of the team, you might think we were friends before, but we weren’t. We knew of each other from working in the hospitality business, but that was it. Now we are family. None of us started this journey with any wine experience. Pardon (Pardon Taguzu) came through me, as I taught him.  As we grew to know each we discovered the strengths and interests of each other. Marlvin (Marlvin Gwese) turned out to be very good with identifying Cabernets, particularly those from Napa Valley and Australia. Tinashe (Tinashe Nyamudoka) had an affinity for the wine of Southern France and Spain. I am very good with Chenin Blanc from South Africa and Loire and Syrah and finally Pardon has a strength in Italian wines.

As the captain my job was to help break it down and make a judgement when we don’t know exactly what the wine is.

ASI: The World Wine Tasting Championship is a prestigious event. How did you train for it?

JD: I must say it was an amazing experience. It’s a heady moment when you are in a room with wine experts that have been drinking for thirty or forty years.  For us to be successful, we had to keep our cool and do what we can. In terms of training, it was difficult, as we didn’t have many resources, particularly in terms of selection of wines from around the world. Thankfully we had some generous donations, and prior to the competition we had the chance to drive around the wine regions of France with Jean-Vincent Ridon which gave us a chance to refresh our memories of some of these classic French wines.

ASI: Was there a moment when you thought I (or we) can’t do this?

JD: Definitively! Personally, there was a period when I thought the world had just stopped working and I felt like I had stopped thinking. My mind was blank. It was overwhelming. Thankfully, when it comes to these contests we prepare as a team and can support each other. Entering the contest, we were very prepared and we very focused. We were also very privileged to have some very high-profile people, such as Jancis Robinson, following and supporting us. The pressure was there but we wanted to win the trophy. It is a competition after all. Ultimately, we lost, but we harnessed the experience of the first event and used it to excel as a team going forward.

ASI: Is it your responsibility to support other Zimbabweans to excel in the field of sommellerie?

JD: Now we have the Zimbabwe Sommelier Association which gives a platform for sommeliers back home in Zimbabwe and those living here in South Africa to ask questions. Tinashe has ‘Somm on Call’ which educates people through his platform. Every day I get questions through my own social media platforms. I am so happy to help that way. We all try to help the best we can.

ASI: You’ve accomplished a lot. Where are you on your journey?

JD: Eleven years down the line, I’ve put a lot into the last eleven years of training including time, energy, passion, perseverance, and money. It’s really paying off now. In any journey if you calculate your move properly you can reap what you sow. I am not successful yet. I am still travelling on this lovely journey of wine, navigating my way to the promised land, which for me is having a platform to mentor people in a class, not as a transitional experience, but for a long time. At the end of the day, education is key. The best thing you can pass on to someone is education, everything else vanishes. That’s a true weapon they can use for their entire life!